All You Need Is Kill by Hiroshi Sakurazaka


Happy New Year and welcome back to all those joining Michael and me as we approach the end of our sixth year of reviewing books and movies together (just a few months away). We obviously loves us some SF as that is where we started and we keep re-visiting. This time, though, we were directed to this title by our readers' poll. You'll hear no complaints from me when the result is trying out new SF.

Click here for Michael's film review of Edge of Tomorrow
at It Rains... You Get Wet


Private Kiriya saw the military as the place to do something meaningful with his life. The reality of enlistment and his first battle experience serve to alter his innocent dreams. However, when he finds himself living that first battle over and over again, he begins to think maybe he was right in the first place.

Earth has been invaded by an alien race's colonizing vanguard. These so-called Mimics consume everything in sight and, despite being pretty pitiful in and of themselves, constantly overwhelm human soldiers/strategy with their numbers and tactics. Keiji Kiriya is a Japanese soldier who is part of the United Defense Force protecting Japan from a horde of Mimics. These hapless souls strap into Jackets and hit the field of battle with snark and bravado and are humanity's last hope. Kiriya dies not long into his first battle but wakes up the previous morning with his place still held in his detective novel. The day repeats and he's on to his first battle for the second time... and the third... and the fourth... Live. Die. Repeat.

As he lives his last 24hrs over and over again he becomes more and more interested in an American soldier who seems to have this whole Mimic fighting business figured out. Her name is Rita Vrataski and she's the most famous soldier in the UDF. Eventually he discovers they have one very important thing in common and it just might be the thing that allows them to turn the tide of war in Earth's favor.

Reading this book was a series of ups and downs. One moment you're up, enjoying the Jackets, the battle, the pacing, the tone and the next moment you're down, getting really pissed at the ridiculous comments about women, the inconsistencies in the rules of the world and the fact that if you think too hard about the Mimic time management business it just doesn't hold together.

For example, despite Rita developing into a layered individual who just happens to have a natural talent for soldiering, the reader is treated to this gem:


Of the three types of women the human race boasted-the pretty, the homely, and the gorillas you couldn't do anything with save ship 'em off to the army-I'd put her in the...

And no matter how a woman fitted into the plot or tactics, there's never any doubt about how she looks, whether it's relevant or not (surprise, surprise: it never was).

Weirdly, the Jackets used in battle (which are awesome, btw) are specifically described as being best controlled by someone with body control not brute strength. (And neither is Rita, the UDF's most successful Mimic killer, anything like a gorilla.) So why the tired old trope of athletic/militaristic women being She-Hulks when compared to their peers?

But then there's the great running gag about the book he still hasn't finished despite repeating the same day 150+ times. His memories are intact and it's obvious he's still reading it so he could finish but, you know, so hard to get to the end when so much is going on. The bond he and Rita form is influenced heavily by the isolation imposed on each of them in their turn. It's touching and, more importantly, exactly where the story and plot take you.

And how can you not be impressed with an author who manages to make a broadsword type weapon the most useful way to tally kills when actual guns and futuristic battle armor exist?

One of my favorite aspects of the story is a bit spoilerish so BE WARNED. BEGIN SPOILERS:
Kiriya eventually jumps ahead in his loop and so his day is not exactly the same as every day has been for almost half a year. The book can be a bit single-minded in its focus so the repercussions of events are sometimes unrealistically limited. However, I appreciated the nod to how difficult it would be to have something different happen when you've become accustomed to every day being the same.

It was disappointing that the English translation doesn't include the illustrations from the original Japanese edition. I highly recommend looking these up as they are very cool. Having seen the movie first I was having a hard time wrapping my mind around how different the Mimics were and so was especially enjoying the illustrations of them. Plus, isn't that cover wonderful?

On a side note, don't skip the author's note at the end. His inspiration and brief commentary on heroes is pretty interesting.


Coming up next:
Like Water for Chocolate by Laura Esquivel

Favorite mystery/thriller: Complicity by Iain Banks
Perhaps not a conventional mystery but my pick all the same.

Favorite Sci-fi: Ancillary Justice by Ann Leckie
This title had been on my TBR since before its release date. I'm in a reading community full of fans of a particular series (they shall remain nameless here) and it took me a while to realize that while we all love this same series it's almost all I have in common with them reading-wise. Neglecting this title is just another example of that. I can't believe I let this sit and sit due to a slightly rubbish review from that community. Ah well, it was wonderful even if I was late to the party.

Favorite Romance: Tie!
Sorcerer to the Crown by Zen Cho
The King's Man by Elizabeth Kingston

Favorite Short Stories: The Thing Around Your Neck by Chimamanda Ngozi Adichie
Kate Elliott's collection was a very close second.

Surprise blunder: Foreigner by C.J. Cherryh
I think it's time for me to finally accept that despite almost universal praise C.J. Cherryh and I just don't click.

Favorite author discovered in 2015: Kate Elliott
Technically I didn't first read Kate Elliott in 2015 but if I ever get around to posting about sgwordy's Great Reading Love Affair of 2015 it'll become clear that I did, in fact, discover KE in 2015. :)

Most re-read author in 2015: Kate Elliott


And since I do occasionally do something other than read...

Video games:
Favorite - Gone Home
SW:ToR and I had a bad break-up. Let's not speak of EA ever again. 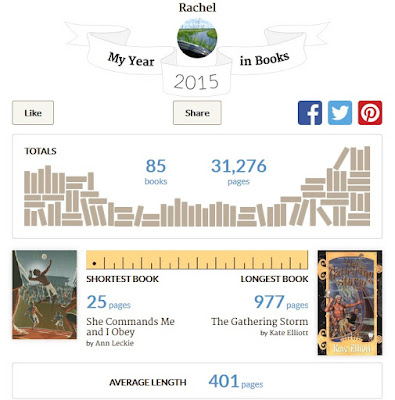 In reverse chronological order, links to the joint post series:

The Last Duel (coming soon)
King Rat
That's a Wrap!
The Sentinel
Strangers on a Train
Three Musketeers
52 Pickup
Life of Pi
Deliverance
The Laughing Policeman
The Joy Luck Club
Like Water for Chocolate
All You Need Is Kill
Zodiac
Eaters of the Dead
Tinker Tailor Soldier Spy
Watchmen
The Shining
Sphere
The Accidental Tourist
Lost Moon
Brokeback Mountain
Breakfast at Tiffany's
Hell House
A Wizard of Earthsea
The Andromeda Strain
Hombre
The Bourne Identity
Empire of the Sun
Misery
The Name of the Rose
I Am Legend
The Right Stuff
The Haunting of Hill House
Black Hawk Down
Salmon Fishing in the Yemen
13 Days
The Constant Gardener