The Name of the Rose by Umberto Eco 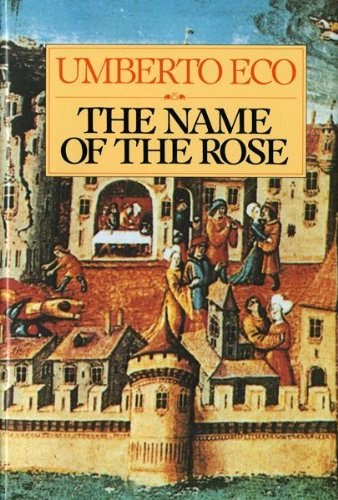 
Thank goodness for my ongoing partnership with Michael! For one, it's super fun and, for two, teaming up with Michael is always recommended. But, also, because without this ongoing series I would be completely out of the book blogging game these days.


If that sounds familiar, it's because it's exactly what I said last month. Now, I'm still fully grateful for the joint fun Michael and I have every month with these posts but, my gosh, I'm so tired of the book slump I'm in. I discovered why I have been so quiet about books: It's hard to have anything to say when these are your results over the last few months. *sigh* I'm just not connecting with anything these days book-wise. And I'm very sorry to say, this book did not get me out of the slump.

Click here for Michael's film review of The Name of the Rose
at It Rains... You Get Wet

Adso and his mentor, the monk William of Baskerville, have arrived at an unnamed Abbey in Italy as an envoy for the Emperor. Unknown to them, a monk has died at the abbey, and they will shortly be embroiled in an investigation of this and other deaths.

...I could argue endlessly about fine points of theology and morals.

The above quote should be applied liberally to any discussion of this title. It might be that you, dear reader, do not have the patience to read "endlessly about fine points of theology and morals" and so may have to pass on this one. (Also, they are specifically Christian theology and Christian inspired morals, not necessarily a broad treatment of either.) There is certainly a traditional murder mystery set-up with the attendant collection of suspects but that cannot be separated from the historical setting of the novel. Ye have been warned.

And if I felt the need to warn you it's probably a tip off that I found the setting tedious rather than intriguing. After reading for a while, I got the impression that Eco realized his historical expertise might not be appreciated by every reader. Each chapter has a concise, accurate (and sometimes funny) descriptor:

In which Cardinal del Poggetto arrives, with Bernard Gui and the other men of Avignon, and then each one does something different.

In which there occurs a fraternal debate regarding the poverty of Jesus.


Making it quite easy, if one so chooses, to simply skip the chapter and move on to another that might actually have something to do with the mystery. A well-paced thriller this is not.

Adso is telling this story in his old age. Adso the younger is not exactly the quickest of wits but his elder self happily comments on past behavior making for some interesting moments of self-reflection. William, being idolized by Adso the younger, comes off a little perfected but it rarely detracts from his earnest self-expression and delightful sense of humor. (Admittedly, said sense of humor ends up buried between pedantic moralizing but, hey, some people might like that.)

Along with the mystery, my favorite part of the novel was the labyrinth library and all the chatter about books. The Abbey runs one of the weirdest libraries I've ever encountered in fiction. The bizarre organization of books is only the start of this decidedly cultish library.

And the books are arranged according to the country of their origin, or the place where their authors were born, or, as in this instance, the place where they should have been born. The librarians told themselves Virgil the grammarian was born in Toulouse by mistake; he should have been born in the western islands. They corrected the errors of nature.

Despite being interested in whodunnit and just what the heck was going on in the library, I can't really recommend this title to anyone who does not have a very specific interest in Catholic doctrine and church politics from the 14th Century. There's a good book in here, it's just buried beneath the historical setting. It's quite a shocker to this fan (huge fan, actually) of historical fiction to have been so bored while reading but there it is. It happened.


Coming up next:
Misery by Stephen King