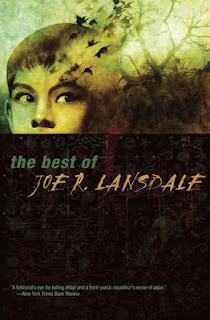 Title: Bubba Ho-Tep
Author: Joe R. Lansdale
Publisher: Tachyon Publications (2010)
Note: This short story was originally published in The King is Dead: Tales of Elvis Post-Mortem, 1994
It all started with a short story and it only took two years for Michael and I to add another short to the wordy bit of our joint reviews. It's just icing on the cake that we're getting to serve this one up on the same weekend that college football starts. I'd say this review is going to be short because the story was short but, come on, we all know it's because halftime only lasts 20 minutes. But, wait!

We absolutely cannot continue with this post without a huge shout out of thanks to Michael for the awesome Bubba Ho-Tep DVD edition he sent to Dr Musacha and me. Holy crap, it is so freaking cool! Click here for details and, no, that is not a picture of Elvis' uniform it is an actual slip off cover that is a miniature of the shirt. Sweet!!!!!

Click here for Michael's film review of Bubba Ho-Tep
at It Rains... You Get Wet

Elvis is not dead, he's in a Texas rest home. However, he's not resting peacefully. His old body is falling apart and even his, erm, VIP is letting him down. But when weird shit starts up in the Convalescent Home and his fellow denizens begin die of unnatural causes, it's just the inspiration he needs to pee in the toilet and be the hero he always played in the movies.

This is a weird, weird, weird story. I've never read any Lansdale but I get the impression this is not his only weird story. When I first started I was put off by the focus on body parts, fluids and general raunch but as I continued reading it was impossible to not get involved in Elvis' pit of despair. Elvis is pretty pitiful at the outset. Mentally and physically he is a poor specimen and pretty much waiting to die. Underneath all the parts that made me go "ew, are you kidding?" was a really sad man with a series of regrets. I wasn't expecting such a genuine depiction of the frustrations of old age in a story entitled Bubba Ho-Tep but there's no denying the running theme, even during the heroic ending, of the challenges of old age and of being left behind.

But still, it's so weird and pretty gross, too. You really should prepare yourself for icky moments and wtf moments but if you can get past them* you'll find some genuine fun. How could it possibly not be fun when a mummy invades a rest home? When Elvis gets to be not only alive but a mummy slayer!


I have many comments on the movie so I'm heading over to the review... in between the football games, of course. :)
rating: 3 of 5 stars
Coming up next:
The Great Raid  by William B. Breuer