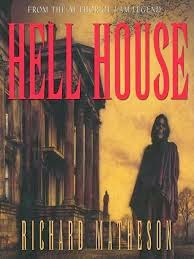 
I think this final title of our year might be the third Matheson book in our joint post series. A moment, please, while I do a quick search... For once, my memory serves me well. Here's the first we did and then another earlier this year for a second go. I was hoping third time's a charm for me and this author - who I don't click with - but, alas, it's clearly not meant to be. At least I know for sure now and can comfortably move on from Matheson's backlist.

Click here for Michael's film review of The Legend of Hell House
at It Rains... You Get Wet

Title/cover:
Title rivals Florence for the best thing about the book. It sounds cool, it’s succinct and apt. (As you’ll see, I’m really reaching for anything positive to say about this book; don’t say I didn’t warn you, if this is a novel you like, you won’t like this review.)
Premise:
Two mediums, a scientist, and an assistant have one week to take on the powerful, clever, cursed, and diabolically haunted Hell House.

What works:
Florence. There are essentially 4 characters in this novel (not counting the house) but only one of them is well-characterized. When Florence first appears it seems like she’s going to play the ‘dippy sensitive’ role but she turns out to be a very well-rounded character. She is quite sensitive (she’s a medium so I’m using this word more in those terms) and very empathetic, both of which turn out to be great strengths and great weaknesses in her time in Hell House. It was also a cool feature of her character that her communion with the dead was intimately tied to her monotheistic faith.

The mystery-related dramatic tension. This story is a melding of a haunted house story and a mystery. The dramatic tension related to the mystery periodically created moments of tension and excitement.

What Doesn’t:
So many things!!! The writing is poor, the dialogue is uneven, and the characterization is not well done (Florence excepted). It’s sexist, misogynist, and homophobic. One could argue that it is the characters/house who are these things but I could argue (and do!) that choices were made by the author that go beyond simply assigning characteristics. This not being my first Matheson book, I am seeing a definite pattern in his choices as an author and they’re a problem. (I’m also pretty sure he’s of the school of thought that says ‘but there’s no reason for it.’ Gross!)

It features extreme sexual violence against women whilst the men are attacked in multiple, non-sexual ways and usually via their perceived mental faculties.

The Ending [major spoiler to come, highlight if interested]: After spending the length of a book with a super powerful villain puppet mastering every single scene, he is defeated by what amounts to name calling. Seriously? Name calling? (And while we’re here, the villain’s motivation is that he’s short????)


Overall: Skip this one, it sucks.