Operation Terror by The Gordons 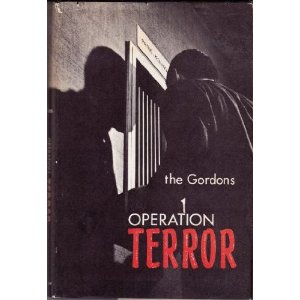 If Michael and I were on the East Coast we'd obviously be distracted by events of greater import than our monthly duo post. Since we are dry and with power on this side of the US we will forge ahead with this month's pick but I'm definitely keeping our Atlantic friends in my thoughts and wishing as quick a recovery as possible.

All the credit goes to Michael for this Halloween pick and he sure did pick a good one. It's not exactly horror but the chilling suspense builds nicely and, if you're not a horror fan, this is a wonderful alternative for getting your holiday creeps. For anyone new to the series, this is where Michael and I choose a book/movie pairing and I say a few words on the book and Michael says a few words on the movie.


Click here for Michael's film review of Experiment in Terror
at It Rains... You Get Wet

Thus begins the partnership between Kelly Sherwood and John Ripley to catch a bank thief. Sherwood, a bank teller, is ambushed in her garage by a man who promises her a cut if she helps him rob the bank. He also threatens her (and her sister) if she does not help. Not long after he leaves, she calls the FBI (TSTL Miss Sherwood is not!) to report his threats. He was waiting for her to do this and attacks her. He makes more threats and it isn't until Ripley, an FBI agent, calls back that she is able to alert the authorities.

She thought quickly. "I brought lunch with me today."

"No, Kelly, you didn't. I'll tell you what you did. You were talking with the police. You were telling them about last night."

"Shut up." The trigger had snapped. He said angrily, I'm going to punish you. I'm going to do it through your kid sister..."


Operation Terror isn't just the title but the philosophy of The Gordons' villain. He threatens and harasses Sherwood relentlessly and without much of a pattern. He disrupts her sleep and keeps her in constant paranoia regarding the safety of her sister. He wants to break her down, break her will and so be reasonably sure that she will abet him in his robbery. Against this assault, Sherwood works closely with Ripley and the FBI to determine the identity of the robber.

It's possible that many readers prefer modern thrillers with all the suspense that modern technology can offer but I have to admit to being a sucker for finding a payphone, getting access to punch cards, and waiting several days for background information from the "main office." Not only does it change the pace and strategy of a manhunt but it has the feel of placing the story in an alternate universe (ha! I say this like I don't remember only needing a dime to make a call at a payphone:) with alternate rules. The fun of it is re-organizing your expectations for what can and cannot be accomplished under a particular set of circumstances.

And the "details" really are satisfying. This is a thriller with a brain full of characters with brains (and a surprising mini-twist for the character of the villain). Instead of rolling your eyes at the obvious holes you'll find yourself wondering if you could have got around the FBI/villain's plan. The lack of holes keeps the suspense as the centerpiece and that is pleasing indeed.

For all the positives there is something slightly clumsy about the writing. I could never quite put my finger on why it seemed to stutter but that it did I could never ignore. It's a short book that you ought to fly through with very little pause but that isn't quite how it reads. It's not a deal breaker or anything, just noticeable. On the plus side, it's properly copy edited and what a refreshing quality that is!! (Yeah, that's right, I just got excited about copy editing! But seriously, have you seen some of the slip ups in books getting into bookstores these days?)

Don't miss this big thriller in a small package, it's a quick and satisfying read. Perhaps this means I should seek out more work by The Gordons. Anyone have any suggestions?
Don't forget to check out the film review.

Life is Full of Scary Shit

One of its scariest attributes is The Enabler. Don't be one.

Brutsch is a grown-ass man who has made his own choices, choices that creatures with opposable thumbs would generally find repugnant. Yet when he showed off the gold-plated Reddit bobblehead award he received “for making significant contributions to the site,” he was offering very real evidence that in addition to being a singular, walking piece of vomit, he’s also undeniably a bro in a community of fellow dirtbags. He existed, and thrived, because he had the encouragement to do so.

Eye of the Beholder

sgwordy says: So if I decide the sky is white and start looking at it like it's white will I see white more than blue?

Dr Musacha replies: It doesn't seem like that should work.