Breakfast at Tiffany's by Truman Capote 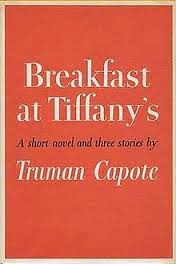 
I'm really excited to start the year (perhaps moving into our sixth year of doing this??? Michael, can you remember?) with one of the titles gleaned from Michael's poll results. It was a fantastic idea that Michael had to allow interested readers to make suggestions for our book/movie postings; and then for everyone to vote on them. One of the winning titles, this one, I haven't read/watched for over a decade. It's been cool to re-visit.

Click here for Michael's film review of Breakfast at Tiffany's
at It Rains... You Get Wet

From an indeterminate point in the future, the narrator in Breakfast at Tiffany's recounts his friendship with Miss Holiday Golightly, Travelling. We know at the outset that he hasn’t seen her in the intervening years. He even mentions he never thought to write about her until an acquaintance calls him up to see a remarkable photograph of a piece of artwork resembling Holly. Both men, in remembering Holly, exhibit the melancholia that pervades this novella. Even in scenes when Holly and the narrator are pulling larks in their neighborhood, having drinks, and shooting the shit there is an ever present sense of sadness. The narrator, who is never named, meets Holly after moving into a room in the same boarding house. Holly keeps forgetting her key and ringing his bell. They don't actually meet until a night hiding in his apartment from a john (windows make such handy exits) but then she stops ringing his bell. After writing a polite note to her the next week, she invites him to a party.

It feels melodramatic to describe the narrator as obsessed with Holly but it’s difficult to find another word for it. He’s one of those people that is never quite comfortable being friends on the terms that are offered. Holly is described multiple times as ‘a fake but a real one’ which mostly seems like a superficial alternative to noticing that Holly wasn’t given the life she wanted so she’s attempting to take it. The narrator is relentless in trying to get at what he thinks is real about her and almost equally relentless at rejecting what he sees as fake. (Or, at the very least, judging it.)

Breakfast at Tiffany's is an interestingly crafted book as the reader is never outside of the narrator’s very strong view of things yet it’s still easiest to know more about Holly than him. I get Holly. I get her fears, insecurities, ambitions, and frustrations. I get her charm, guardedness and managing nature. I don’t get very much about the narrator. It’s possible that’s a pretty personal reading of it, though. I’m not a call girl living in 1940s New York but I get the challenges that were present for women flying solo in that time period. The narrator, despite only hinting at his non-Holly life, seems to have one; but readers only see him through the lens of his obsession with Holly. For me, that’s a limiting view of a character.

(For a counterpoint, see this article by someone who connected deeply with the narrator. I was struck particularly by this line: "Capote doesn't claim his alter ego's sexual identity, but it's clear that Tru [narrator] is gay from his infatuation with Holly." It was illuminating for me to read that as it's a perceptiveness that my experience has not yet brought to me.)

The narrator and Holly have a lot of good times together (and some full-on quarrels, as well) but a sense of menace is never far below the surface. It’s not just the narrator’s structure that makes it feel like an hourglass is running down for Holly. It’s the edge she’s always pushing to get the life she’s decided is the one that will cure the 'mean reds.'

I’d be remiss to not mention that this can be a difficult read due to the racist attitudes of many of the characters. A lot of slurs are bandied about - in addition to a questionable decision on the author’s part - which makes this a very white-centered NYC story. (And I’d love the chance to ask Capote about Holly’s assessment of gay women. I'd like to know what inspired him to make that choice.)

Watching this video this morning I felt a special glow of warmth for Marshawn Lynch:

Watching this video this evening I knew it was love:

Because we come to the world fresh we foolishly suppose that with our new lives new possibilities are born. It isn't true. The short range of possibilities are already worked out. We can change nothing, we can expect nothing. However long it takes the world will teach us our places, by preaching itself against ourselves...

Favorite mystery/thriller: Devices and Desires by P.D. James
(Didn't read a lot of these this year so this wins by default; really didn't like the last third of the book.)
Woops!!! How could I forget a book I just read last month and was definitely better than the above?!?
Child 44 by Tom Rob Smith

Favorite historical fiction: Empire of the Sun by J.G. Ballard

Favorite Romance: Laura Kinsale audio releases
(Didn't read a lot of this genre either and didn't come by anything new that I liked.)

Surprise hit: The Sword and the Dagger by Ardath Mayhar

Surprise blunder: Bitten by Kelley Armstrong
Heard lots of good stuff about this one but couldn't even get past the second chapter

And since I do occasionally do something other than read...


Honorable mention to Marvel's Agents of S.H.I.E.L.D as I'm having so much fun with that TV show