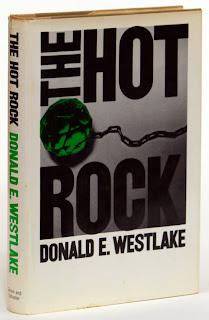 
Ah, the New Year.
What's that you say?
In internet time folks are already predicting the hottest trends for 2014?
Yes, I admit, in internet time I have missed the New Year (and my end of the year reading roundup *sigh*). But despite the fact that I'm doing a fair imitation of having quit the internet I am still around. Concussions, injured horses, personal events and planning a move to New Zealand have all come between me and my digital world but I certainly would not miss out on inaugurating a new year of reviews with Michael. We've already got the first few months mapped out (I may be negligent of the internet when I get busy but I'm never negligent of books:) and Michael picked a great way to open up the new year. For those that are new to this series, this is where Michael reviews a film adapted from a book which gets a review here. Happy New Year and enjoy!


Click here for Michael's film review of The Hot Rock
at It Rains... You Get Wet

This is the first Donald E. Westlake I have read (including all the pseudonyms under which he published) and in the time honored tradition of not being aware of something and then suddenly seeing it everywhere once it comes to your attention (is there a name for this phenomenon?) I came by this article. Newbies like me can learn a lot about the career of Westlake and old fans will probably enjoy the recap of his writings. Now, on to The Hot Rock...

Dortmunder is a criminal mastermind who, fresh out of jail, is ready to get to work for his new employer, Major Patrick Iko. Iko would like Dortmunder and his crew to steal an important artifact his country lost in a reshuffling of borders. The artifact, an emerald with religious significance, is on display in New York as part of an Exhibition that will soon hit the road. The crew decide they want to take the rock (soon to be hot) before it's on the move. Thus begins the first of many capers. Criminal mastermind he may be but Dortmunder is also singularly unlucky. He can pull off the perfect caper, all except for the part where you leave with the item of interest.

The patrolman on the switchboard...said, "Sir, the phone's gone dead."
"Oh? We'd better call the phone company to fix it pronto," the lieutenant said.


There's a lot of fun in this book and it's not just the clever capers. Plays on words, puns, misunderstandings, and a healthy sense of the ridiculous keep this story entertaining. The dialogue will make you laugh and the subtle humor of the writing will keep a smile on your face. My favorite moment has to have been when Dortmunder and his parole officer are speaking at cross purposes which results in the parole officer thinking he's actually rehabilitated a criminal.

He gazed around the bleak battered office with its grimy furniture and the faded inspirational posters on the walls, and his eyes were shining with an unaccustomed glow. He could be seen to think, It does work! The whole probation system, the paperwork, the irritation, the crummy offices, the surly parolees, by God it works!


It's a testament to the writing that I wasn't just laughing but also genuinely feeling for the poor schmuck. Of course, at that point I was feeling so bad for Dortmunder's failed capers that I was probably in a vulnerable place. You end up feeling so bad because these are beautiful capers; so elegant and stylish that it breaks the heart when they fail.

I've got to give this locomotive back," he [Iko] said. "Don't lose it, don't hurt it. I have to give it back, it's only borrowed."


How can you not love the hell out of a caper that includes a borrowed locomotive? And it's only one of them. The one with the helicopter is just as awesome. Toot toot.

If you're even mildly entertained by a good caper than this title is definitely for you. The humor and fun characters are just icing on the cake. And the characters are tons of fun. Each crewman brings a unique skill and personality to the group and watching these traits unfold is quite a treat. By the end I could imagine even the way they each walked much less how they talked and dressed. And don't worry, it wasn't due to laborious descriptions, it just comes quietly across as you make your way from page one to the end.

I'm off to check out the film review (won't you join me?) but how about my favorite quote to enjoy before you go?