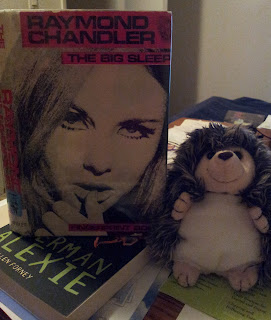 Back when I used to watch every movie that came out rather than just every movie trailer, back when I worked in a video store (pre-DVDs and everything!), back when I lived at the beach... oh wait, that's not right... anyway.... Back then, I took a fairly large amount of pride in giving good movie recommendations. If you would kindly share a few titles you liked and why, I was pretty sure I could get you out the door with something you'd like. My feedback was universally positive which either speaks to my success rate or the kindness of movie store patrons in not blaming me if it didn't work out.

My pride in recommendations has retired from the movie realm and moved into the book realm. I've always been a bookworm but I now have so many more people around me that read for pleasure. I guess in high school and college folks were just trying to get through the required reading. Or just weren't interested or who knows, but the point is, yay, more people I know are reading these days. So now I get a little information about the books a person likes and proceed to make recommendations. I have learned that this is not what everyone does. I have learned this the hard way.

What do you do when a friend recommends something and it's crap? I don't mean that you simply don't like it but that it's crap. Crap = poorly written, uses offensive stereotypes, relies on cliches rather than character development, etc. What do you say? I'm still searching for the appropriate way to discuss material that actually offends me but here's what I want to say:

You and I just discussed various titles and talked about why we liked them and you still thought this title would be acceptable to me? Why? WHY? And while we're at it, why doesn't the sucky writing bother you? Do you not care about character development? And, ok, maybe this is a "just for fun" title so then I have to ask: why aren't you offended at the egregious homophobia/sexism/racism? What is wrong with you????

Do you see why I am still formulating a better response?
Posted by Rachel on 3/10/2012 No comments: