Black Hawk Down by Mark Bowden 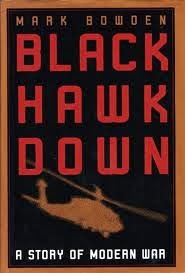 
Here we are at the end of September and time is flying by. I believe it's now that time of year that Michael calls The Slide. I'm happy to start The Slide(TM) revisiting an old favorite. We're also just days before the 20th Anniversary of The Battle of the Black Sea (or The Day of the Rangers depending on your nationality) and I am firmly of the opinion that this book is not only of historical interest but remains topical. It seems the moral questions of humanitarian relief, military intervention, and nation building are never far from the heart of US foreign policy. This title focuses exclusively on the military intervention tip of this thorny triangle.

Click here for Michael's film review of Black Hawk Down
at It Rains... You Get Wet


Black Hawk Down recounts a mission by Task Force Ranger into Mogadishu, Somalia which occurred in October of 1993. What was intended to be a one hour mission to capture a warlord’s top lieutenants became an overnight urban battle after two Black Hawk helicopters were shot down.

Mark Bowden presents a strict account of the Battle of the Black Sea but its style is one of real-time drama. Through extensive interviews, research, and military records (much, if not all, of the 15 hour event was captured on video and audio), Bowden was able to recount the battle from the perspective of the US/UN soldiers and Somali militiamen and civilians. Even though the reader is treated to an almost minute-by-minute, factual account, this book reads much like a novel. Excellent structure creates genuine suspense without disservice to real events or hyperbolic dramatization.

Bowden does an excellent job of creating the emotional environment surrounding the battle and even includes some of the preceding US-Somali relations that led to it. (The latter is necessarily limited as that was not the focus of the book.) The various and varying attitudes of US soldiers and Somalis are presented with care and without obvious bias. In fact, this was a strong point of the book. Bowden does not appear to "have a side" or an agenda. Very often authors fall into the trap of setting readers up to have a particular reaction to events/people, but it's clear that Bowden's only agenda is to recount "a story of modern war."

SPOILER WARNING: This warning may not be needed for the recounting of a non-classified military exploit that has since been made into a film. Nonetheless, the warning remains. Highlight the following if interested: [One of the most interesting parts of the book for me was the capture of a Black Hawk pilot by a group of Somali militiamen. The importance of a captured US soldier, and which group could afford to keep him, was something I had not previously understood. It was also interesting to read the account of the interactions between the captured pilot and the man who cared for him. After the unrest and chaos of urban battle, the relative quiet of captivity was surprising and, again, not where my previous understandings would have led me.]

I give this book a very high recommendation. This event is an extremely relevant part of modern US history and Bowden recounts the battle with authority and rigorous detail while maintaining an easy-to-read style. My recommendation shoots even higher if you've only seen the movie. Don't let the movie be your only encounter with this material.


So about the movie...  don't forget to check out Michael's post.

Note: I've written previously about Black Hawk Down and the issue of humanitarian relief . Parts of this review were originally in that 2009 post.
Coming up next:
The Haunting of Hill House by Shirley Jackson