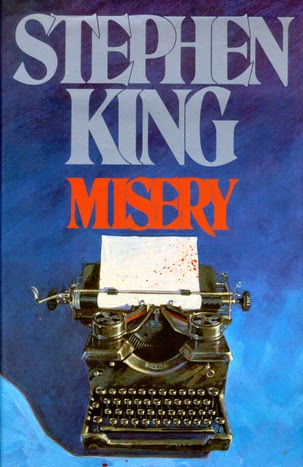 
As Michael and the rest of the northern hemisphere folk enjoy the improving weather, we down here at the end of the globe are building more fires and sadly saying goodbye to daylight after work. At least I have mlb.tv to get me through the long winter nights. And, books! Yay, books! I think I am slowly reading my way out of the slump. Not necessarily with this one, but still, things are improving. I forgot to ask Michael if he was surprised I suggested a Stephen King title for our series, I'm not usually King's biggest fan.


For those that are new to our monthly series, this is when Michael reviews a film adapted from a book which gets a review here.

Click here for Michael's film review of Misery
at It Rains... You Get Wet

Because I like books (and I don't live under a rock) I'm pretty familiar with Stephen King's backlist. I've dipped into it several times on the strength of his popularity but I'm almost never left a satisfied reader. So I moved on to other authors and left King to his many, many (many, many) fans. But then Misery came up in some random conversation between Dr M and I and the premise sounded awesome. Crazy successful author gets 'napped by his "number one fan" and coerced to bring her favorite character back to life. I was hooked. I had Expectations!! I won't say they were great but they were certainly specific. It took at least half the total pages found in the book for me to lower adjust my expectations.

So, yeah, crazy successful author gets kidnapped by his number one fan and she forces him to perform the ultimate takesy backsy and bring her favorite character back to life. Said author was tired of his Cash Cow protagonist and so wrapped up the series with her death. Number One Fan did not care for this development.

Even with my limited experience I feel safe describing this as typical Stephen King fare. Well-written, nicely plotted, perceptive, funny at moments, horrifying at even more, etc. And, of course, interspersed with those lovely turns of phrase a person just can't get out of her mind.

...the survival instinct, he was discovering, might be only instinct in itself, but it created some really amazing shortcuts to empathy.


And his unfailing ability to bring the physical to perfect life with words.

The quick and uncalculated movement awoke his pain from its doze. It snarled dully in what remained of his shins and in the bunched salt-dome that had replaced his left knee. It turned over, needling him from where it lay imprisoned in its cave of bones, and then fell lightly asleep again.


I think what it comes down to is that I am almost always impressed with his ability as a writer but I have very little interest in his stories. I did a little poking around the old intertubes for some extra info on this title and I learned that it is one of King's personal favorites. Also, that he wrote it out of frustration with his fan base for pissing and moaning when he went trotting outside the horror genre, and that Number One Fan represented his own struggle with addiction. There I am thinking I'm going to read an over-the-top look at how an author can feel enslaved by his work and, by extension his fans, but instead it's just a straight up horror show of torture and psychological abuse. There's nothing really wrong with that, if it's what you want to read, but it's not for me. Plus, there were those Expectations. But even when my expectations were realigned I felt like I was enjoying it more for the behind the scenes writing stuff than for the actual story.

My disinclination aside, I do have some legitimate gripes. If you're pissed at your horror fans, have the guts to express it! Don't snag romance fans under your trailer hitch and then drag them through the slimy gutter of your acute contempt for readers. It makes you look like a raging asshole. Also, it's a little tacky making a controlling woman a stand-in for your addiction (maybe I mean derivative) but it's even worse when you decide her physique is what makes her unfeminine and worthy of even more, if it's possible, contempt. There are a lot of reasons to dislike this woman (she is an inhuman monster after all) but her physique seems like the least of our author's problems.

She did not want to hear about his concordance and indices because to her Misery and the characters surrounding her were perfectly real.


One of my favorite bits of the book was the author's underestimation of Number One Fan's grasp of the obligations of the story-teller to their audience. But I won't ruin it. You're just going to have to read it to find out about the weekly serials and fairness.


Coming up next:
Empire of the Sun by JG Ballard