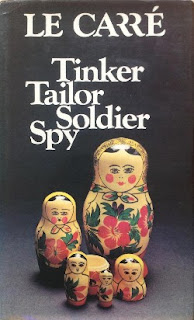 
Fun discovery: winter doldrums can be cured by puppies. But! Suspense novels can be slightly chopped up by puppy distractions. Yep, it’s that time again. When Michael and I post up our book/movie pairing. This is a title I found hard to get into at first but the slow build finally pulled me in. Course that’s when the new puppy entered my household...

(btw, Michael, last day before The Slide, are you ready?)

Click here for Michael's film review of Tinker Tailor Soldier Spy
at It Rains... You Get Wet

Like last month, we're skipping back in time but, unlike last month, this is not a first. We've done le Carre before however this was, for me, the first time I've read one of his traditional spy thrillers (fictionally, I sure do miss the USSR). Tinker Tailor Soldier Spy (holy damn what a great title!) is one of several novels featuring George Smiley. British Intelligence, or The Circus as its lovingly(!?) known, has been dealt a serious blow which, not incidentally, forced Smiley into retirement. However, a select few of his old colleagues need his help to ferret out what appears to be a serious leak. Commence the reconstruction of past events and the stealing of files. (And the jargon.)

John le Carre (a non de plume) was employed by the British Foreign Service and his insider knowledge is on display and immerses the reader quite quickly into the British spy game. I found it a little difficult at first as the book is equally filled with 1970s British slang and context will only get you so far in a sentence wherein you only understand the connecting words. Truthfully, I probably would have stopped reading if not for it being a part of this series. (There are just so many great books out this year!) The slow start combined with the language was making it easy to put down and it wasn’t until the halfway point that I was fully interested.

Not only is this one a bit slow to start but there isn’t a steady build towards a climax. I spent a goodly part of my teen years reading Tom Clancy’s novels and those doorstoppers were usually all over the place with many twists, turns, pauses and climaxes. I found TTSS to use that same sort of pacing, but in a much shorter book it was losing my attention rather than shifting it. Much of the action has already occurred and Smiley is piecing it together. My level of engagement was directly related to who, at that particular moment, was the narrator of the backstory. It makes me think of following along a spiral to the inside and periodically you come by an extremely juicy tid bit before continuing on. You know you're headed there but ymmv on the way.

I've mentioned before that I like a book that gives me something to do. I enjoy it when my attention is required to figure out just where we are in time, who it is that has become the relevant party, and what the subtext of the dialogue is supposed to convey. TTSS certainly succeeds in that realm and, I think, most obviously with the dialogue. There is so much history between the characters (both those in conversation and those to whom others refer) that any exchange is layered with that history and with what the characters are not comfortable saying (it is a spy novel, after all:).

Nothing is worth the destruction of another human being. Somewhere the path of pain and betrayal must end. Until that happened, there was no future: there was only a continued slide into still more terrifying versions of the present.

For all that this one caught my attention (I would say became a page turner but that darned puppy distracted me too much) and directly hit my target for meaty layers and suchlike, I found that I didn't particularly care all that much about what happened to the characters. This is not one of those spy thrillers that relies on situational outcomes for a satisfactory ending. It's almost entirely about the characters and if you get to the end not overly affected by their outcomes it's a bit of a letdown. My detachment from the characters is a bit spoilerish so highlight if interested: while reading I'm following all these different threads - past and present - that all end up leading to Haydon. I do get to know a little about him, his expertise, his charm, his attractiveness, his ability to befriend and betray equally; but I don't ever get to see the close ties between him and the other characters. So when we get down to the end and everyone's anger flames out I'm not able to stay with them. I'm not able to draw on those friendships to see how conflicted everyone is. It becomes more of an academic appreciation rather than an emotional one.

This is all apart from Jim, who ended up being one of those secondary characters that stealthily takes over the whole until you can't imagine the story without him. I might read this one again someday just to make sure I pay extra close attention to him from the very beginning.

My interest is piqued on le Carre spy thrillers so now I need to know the best one to read next. Anyone have suggestions?