The Whistleblower by Kathryn Bolkovac 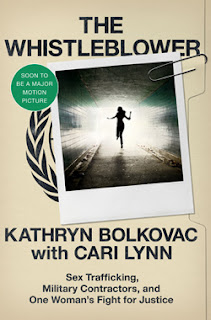 After our annual April twist, Michael and I are ready to get back to the usual. Except, when I scan the list of previous titles we've done, I see that we're not quite back to the usual: this is the first non-fiction title we've chosen. For anyone new to the series, this is where we choose a book/movie pairing and I say a few words on the book and Michael says a few words on the movie.

Click here for Michael's film review of The Whistleblower
at It Rains... You Get Wet

In 1999, Kathryn Bolkovac left her job as a police officer in Lincoln, Nebraska to work for DynCorp, a private military contractor. DynCorp had won the bid to provide the US contingent of international police monitors to the UN's International Police Task Force in Bosnia. In 2001, she was all but sneaking out of the country in fear of retaliation for blowing the whistle on DynCorp and other UN workers for their complicity in human trafficking and forced prostitution. I should probably say further (and physical) retaliation because she had already been wrongfully terminated.

side note: Bolkovac has a website with lots of additional information on this topic (and the book and the movie) and here is the link.

This is the sort of book that I can never quite figure out what to say about except you really ought to read it. It's a hard book to read because it's hard to read about people being abused but it's vital that we have this information. It's vital that we know when bad things happen so that we can fight for and demand justice. It's vital that we know what our tax dollars are supporting so that we can demand that our elected officials do better. It's absolutely vital that we not perpetrate and support systematic abuse of our fellow humans. That's what I find so stunning when I learn about something like this: how can humans do this to other humans? It's absolutely outrageous and disgusting and yet it happens. I'm so impressed with and grateful to Bolkovac for refusing to be yet another person who gave up or turned a blind eye to what was happening.

Bolkovac's persistence in the face of institutional stonewalling is much easier to appreciate in the book than in the movie (as usual I'll leave most of my movie comments for Michael's post). As a trained police officer (the first chapters give a very clear picture of Bolkovac's professional background and expertise), Bolkovac was an ideal monitor to accurately identify just what laws were being broken and to assist the local force with how to prosecute them. Sectarian and racially motivated violence was a legacy that everyone had to work hard to get past and its impact was often felt in what was or was not investigated. This could have an especially detrimental effect on female victims of domestic violence. Bolkovac worked diligently on these cases and this eventually led her to a gender affairs position with the UN. It also eventually led to her uncovering the trafficking and forced prostitution. When these cases were brought to light, with witnesses or video, they would get mysteriously side-lined or "taken care of" internally. Over and over and over again this was happening to Bolkovac (and other investigators who you learn of in the book) and the message was clear: leave this alone. And this is what I meant above about being able to really understand how far the cover-up went in the book but not as much in the movie. It was incredible to see how deep (or perhaps I should say high since we're talking about bureaucracy) the problem went.

Because Bolkovac would not stop trying to pursue investigations and prosecutions for the crimes that were being committed, DynCorp found a rather flimsy excuse for terminating her contract and then proceeded to do it against stated company procedure. The then UK-based company was subject to UK labor laws and Bolkovac sued. The later part of the book is about the case which took about two years (almost the same amount of time as her employment with DynCorp).

The very last chapter addresses the use of private military contractors to represent the US in policing situations (including other instances of extreme misuse of power and resources) but, more importantly, suggestions are made as to how to prevent such situations from occurring in the future. I am always very appreciative of authors and professionals who take the time to present clear plans of action for moving forward. You can't take away that these dispicable events took place - and, worse, that no one faced prosecution - but you can work to ensure it never happens again.

I realize it's glaringly obvious that I highly recommend this book but I'm gonna say it again. Go out and get this book! You will not regret it.

Don't forget to swing by the film review. Before you head over there, enjoy some persistence in action:

Still, I simply was not interested in settling with DynCorp. I told Karen that even if DynCorp counteroffered, to turn it down. "No matter what they offer," I emphasized, "even if they add another zero to the figure, tell them I'm not interested. And I'd like you to add a 'go to hell.'"

Coming up next:
The Black Dahlia by James Ellroy