(Mostly) A Wizard of Earthsea by Ursula Le Guin

As I recall, this month kicks off The Slide (made infamous by Michael:) and I've found The Slide started early this year. What with connection problems and a hard drive crash making computer/digital work more trouble than it was worth for most of the month, and Spring weather keeping me outside, it's no wonder Sept has flown by. October here already? No way, I'm just not ready. But instead of thinking of time passing us by at Ludicrous Speed, let's talk books.

Click here for Michael's film review of Tales from Earthsea
at It Rains... You Get Wet

This review, as hinted in the title, will be mostly about the first Earthsea book but I did pick up the quartet edition with the ambitious goal of getting through all four since the movie purports to be inspired by the entire Earthsea world (in reality it seems to mostly focus on the third book). In A Wizard of Earthsea a young boy from Gont, an island in the northern area of Earthsea, shows promise at the arts of witchcraft and wizardry. He is taken as an apprentice by the old wizard in residence. His headstrong ways don't mesh well with the old wizard and he eventually goes to a fancy school for kids with his talents. His boastful nature ends in a spell that releases a shadow which he will eventually have to face. The subsequent books follow an older and usually wiser wizard as he accomplishes some of his greatest deeds. This last bit we know as the reader as it's implied that his deeds are known throughout Earthsea via songs and poems.

For all the grandeur that is implied by great deeds, wizardry and poems, Ged is a rather isolated individual. Many of his adventures he chooses to go solo or is accompanied by only one other person. He is accustomed to harsh conditions and silence. While not unfriendly, it often seems as if his mind is somewhere else entirely. He has a subtle sense of humor and a soft spot for young, headstrong people. As you might guess, Le Guin's deft hand at characterization is on full display in these books. Add to that her exquisite writing and it seems like a slam dunk for an excellent time as a reader. I know this is true of many readers but the Earthsea stories just don't hold my attention. It was for this reason that I chose this title (and I'd been wanting to watch the movie). I wanted to give them one more try as I'm such a Le Guin fan but I must face it that these aren't the stories for me. I can't even quite put my finger on what it is but I find it so easy to put the Earthsea books down and do something else.

It's a wonderfully built world that is at once completely fantastical and readily accessible. The characters feel real and their actions true. Yet I remain unhooked. I stopped reading about halfway through the third book and I think the second half of the second book was probably the most engaging. I like the creativity and the subtle interweaving of the tales as you progress through Ged's life but, again, it was always so easy for me to put the book down. I find it fascinating when I am blown away by excellence of craft but not at all engaged. It's an odd reading experience.

One thing that kept coming to mind while reading was that it would be an excellent book to read aloud with a group. The language and style lend itself perfectly to an epic saga to be shared aloud. And I do mean shared! I don't think it would quite fit the bill to just listen to an audiobook. I don't know if anyone actually reads aloud together after the age of picture books, etc but these would be the books to do it with.

So is Ged able to face the shadow creature he unleashed? Well, after a side quest with a dragon and an encounter with a powerful royal couple, he does turn his mind more fully to the shadow. What happens after that is only for those that read to the end.

So happy to have internet changeover complete and good connectivity back. For many reasons obviously but also because I got to play swtor and this happened: 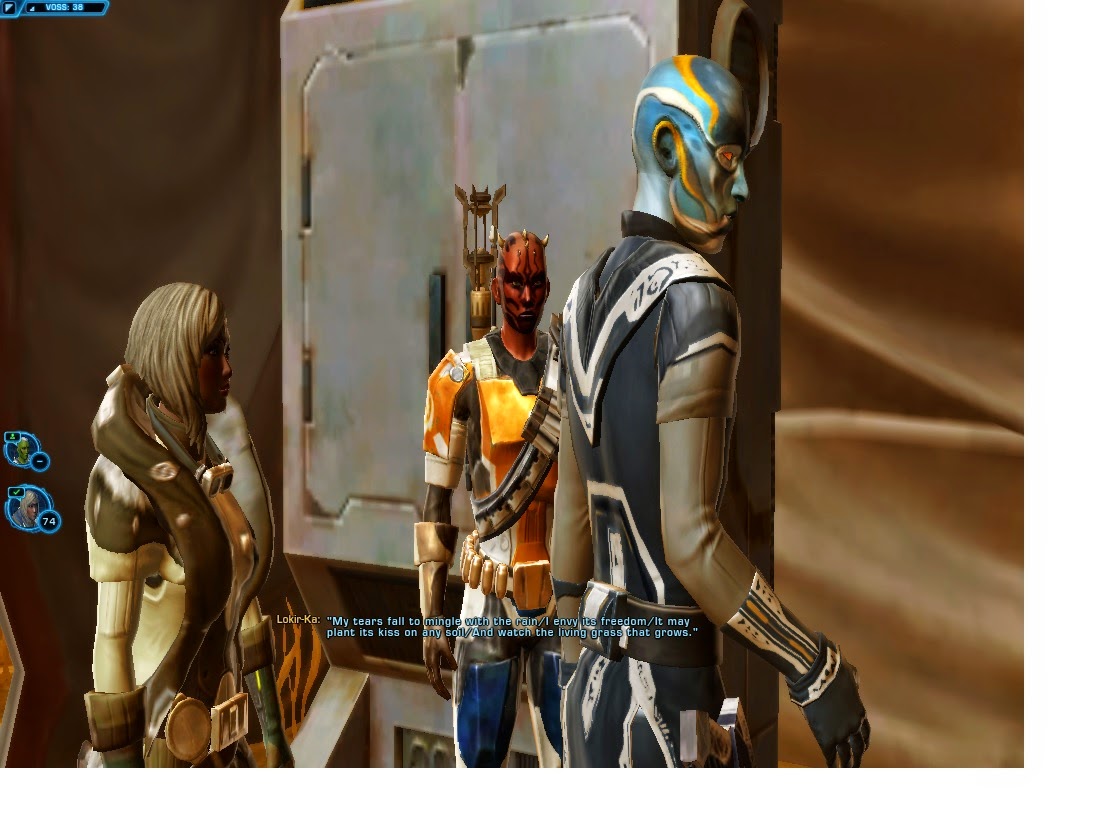