The words of William Sloane Coffin, whose son Alex died at age 24 in a car crash.

Tired of hearing well-meaning friends say, “It is the will of God,” he responded with this: “My own consolation lies in knowing that it was not the will of God that Alex die. That when the waves closed over the sinking car, God’s heart was the first to break.”
Posted by Rachel on 8/14/2009 No comments:

There wasn't really enough of teh good to include in the title but trust me, going from bad to worse is sometimes TEH BEST!

I came by this line (imagine a tongue not a dental device):

"He delved into the hidden recesses of her mouth"

and was overwhelmed by a case of the giggles. I mean, how big is this mouth? How many recesses could it have and where the bloody hell could they possibly be hidden? I had my wisdom teeth out several years ago and that left me with some recesses but they weren't hidden and I don't think anyone was going to go probing them. Weird and ew.

But then, not three paragraphs later, I read this little gem and just about died:

His lips? milked? her lobe?

Not as refreshing as a cold shower but it gets the same results. I figured this was a sign to stop reading.

Normally I would be annoyed to have wasted my time on a book but I feel my life has been enriched by this opportunity to scoff at recess probing and lobe milking. Ah, teh satisfaction!

I don't know who Ubisoft uses for their marketing/graphic design but I am clearly her bitch. Commence drooling: 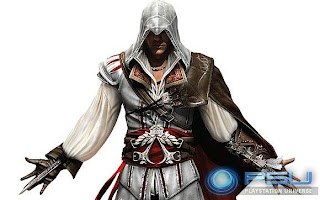 Just off to check out who made Hitman (video game not movie, though I like them both) because that's another one that I can't resist visually.
Posted by Rachel on 8/07/2009 No comments:

"Here was something perfectly familiar--a lady who ought not but very likely would."

Christian in "Flowers from the Storm" by Laura Kinsale