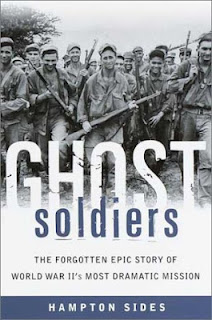 Repeat readers of this book/movie post series might have noticed that Michael and I called an audible. Michael did some reconnaissance and it turns out Hampton Sides' Ghost Soldiers edged out Breuer's The Great Raid as a good read for this amazing WWII rescue mission. I'll probably eventually get to William B. Breuer's book, as well, as this is a bit of WWII history I didn't know anything about and I'd like to continue learning about it.

In an odd coincidence my book club read Unbroken this month and I watched Red Tails this weekend so I'm feeling steeped in WWII history. But let's get to the review so anyone who, like me, didn't previously know about this rescue mission can fix that. For anyone new to the series, this is where Michael and I choose a book/movie pairing and I say a few words on the book and Michael says a few words on the movie.

Click here for Michael's film review of The Great Raid
at It Rains... You Get Wet
From the publisher: "On January 28, 1945, 121 hand-selected troops from the elite U.S. Army 6th Ranger Battalion slipped behind enemy lines in the Philippines. Their mission: March thirty miles in an attempt to rescue 513 American and British POWs who had spent three years in a surreally hellish camp near the city of Cabanatuan. The prisoners included the last survivors of the Bataan Death March left in the camp, and their extraordinary will to live might soon count for nothing—elsewhere in the Philippines, the Japanese Army had already executed American prisoners as it retreated from the advancing U.S. Army. As the Rangers stealthily moved through enemy-occupied territory, they learned that Cabanatuan had become a major transshipment point for the Japanese retreat, and instead of facing the few dozen prison guards, they could possibly confront as many as 8,000 battle-hardened enemy troops.

Hampton Sides's vivid minute-by-minute narration of the raid and his chronicle of the prisoners' wrenching experiences are masterful. But Ghost Soldiers is far more than a thrilling battle saga. Hampton Sides explores the mystery of human behavior under extreme duress—the resilience of the prisoners, who defied the Japanese authorities even as they endured starvation, tropical diseases, and unspeakable tortures; the violent cultural clashes with Japanese guards and soldiers steeped in the warrior ethic of Bushido; the remarkable heroism of the Rangers and Filipino guerrillas; the complex motivations of the U.S. high command, some of whom could justly be charged with abandoning the men of Bataan in 1942; and the nearly suicidal bravado of several spies, including priests and a cabaret owner, who risked their lives to help the prisoners during their long ordeal."
Sides begins this book with the following quote from Dante's Inferno:
Let us not speak of them; but look, and pass on.
It's apt for the book but also very much apt for the WWII history that I've been wading through lately. And, probably, apt for any exploration of war. Sadly, humans are all too prone to "look, and pass on" but nowhere does such a sad reality became more apparent than in war.
Sides allows readers to see this (from the Allied perspective) by intertwining the experiences of the POWs in the camp with the details of the days leading up to the raid. The plight of the POWs begins before the surrender on Bataan, is seen on the Death March to the prison camps and then, in brief but evocative glimpses, through the years in the prison camps.
Sides also includes a small history of the birth of the Army Rangers. For the 6th Ranger Battalion, a mission of this caliber was what they had been created and trained to do but what they had not yet had the chance to do. Joining the Rangers was Filipino Captains Pajota and Joson with their guerrillas who were instrumental in supporting the attack on the camp and providing resources for the evacuation of the prisoners.

Sides does an excellent job of painting a clear picture of the situation for both the POWs and Fil-American forces who eventually serve as their liberators. On the one hand this is something any reader would want, but on the other there is much that is hard to read here and that clear picture hides nothing. The abject despair of war, and its unbelievable absurdities, are brought to vivid life. The POWs initial response to the rescue efforts were particularly heartbreaking. Most of the prisoners were so ill and confused that they had to be convinced - sometimes physically - to evacuate. One POW was so distraught over documents he had to leave behind that he could not be convinced to leave.

Then the prisoner burst into tears and collapsed on the ground. Kinder tried not to consider for even a second the world of despair suggested by this man's predicament; there wasn't time for it now. Kinder lifted him in his arms. Through his sobs the POW said, "Thank you! Thank you! Thank God you've come!"

Reading this will be hard for almost anyone but worth it, as well.
It doesn't change my recommendation of this title but I feel I ought to also mention that it could have been better written (having recently read Sides' Blood and Thunder which was much better craft-wise I was surprised at some of this book's issues). It's unnecessarily repetitive at times, employs overuse of phrases like "in truth," and the alternating of chapters from POW and rescuer points of view was a mistake, in my opinion. But, again, I think it's time very well spent to read this book so I recommend that you don't miss out.

We are all ghosts now
But once we were men.

--from an unsigned diary recovered from Cabanatuan camp


Don't forget to check out the film review.
rating: 4 of 5 stars

Funny on the show, funny in real life.

Check out this article.

And I couldn't agree more with...

I don't know. I think we have this tendency to overrate our powers of reason, and underrate the lizard-brain. We have an even greater tendency to underrate the power of culture and socialization among the elite.

Check out what these unsuspecting Swedes said about their paternity leave:

Before going on leave, Mr. Decker says he thought: "You get up, you eat—how hard could it be?" He was looking forward to getting a lot of personal tasks accomplished during his time off. He was wrong.

"You're pretty much switched on all day, except for a brief nap midday," he said. "And then there was the food. One week she liked eggs, the next day she didn't…It's really hard to schedule life with an 11-month baby."

Mr. Butcher, from Spotify, had originally planned on spending his six-month leave drinking coffee and writing a script while taking breaks in the park to watch his daughter play.

In reality, "I'd be lucky to have 30 minutes for myself a day. The rest was just endless cleaning, feeding, changing and picking up." He says that, two weeks into it, he wondered if he was going to last the entire leave, "but I'm happy I did it and could bond with my daughter."

I just laughed and laughed. Not that I have kids (I'm not interested in that kind of hard work) but it was no surprise to me to read these quotes.
Posted by Rachel on 9/09/2012 No comments:

Found here. The segment that most caught my eye:

But the veil of opulence operates only under the guise of fairness. It is rather a distortion of fairness, by virtue of the partiality that it smuggles in. It asks not whether a policy is fair given the huge range of advantages or hardships the universe might throw at a person but rather whether it is fair that a very fortunate person should shoulder the burdens of others. That is, the veil of opulence insists that people imagine that resources and opportunities and talents are freely available to all, that such goods are widely abundant, that there is no element of randomness or chance that may negatively impact those who struggle to succeed but sadly fail through no fault of their own. It blankets off the obstacles that impede the road to success. It turns a blind eye to the adversity that some people, let’s face it, are born into. By insisting that we consider public policy from the perspective of the most-advantaged, the veil of opulence obscures the vagaries of brute luck.

But wait, you may be thinking, what of merit? What of all those who have labored and toiled and pulled themselves up by their bootstraps to make their lives better for themselves and their families? This is an important question indeed. Many people work hard for their money and deserve to keep what they earn. An answer is offered by both doctrines of fairness.
The veil of opulence assumes that the playing field is level, that all gains are fairly gotten, that there is no cosmic adversity. In doing so, it is partial to the fortunate — for fortune here is entirely earned or deserved.

The veil of ignorance, on the other hand, introduces the possibility that one might fall on hard luck or that one is not born into luck. It never once closes out the possibility that that same person might take steps to overcome that bad luck. In this respect, it is not partial to the fortunate but impartial to all. Some will win by merit, some will win by lottery. Others will lose by laziness, while still others will lose because the world has thrown them some unfathomably awful disease or some catastrophically terrible car accident. It is an illusion of prosperity to believe that each of us deserves everything we get.

I put this under my label "equality" but depending on perspective one might very much disagree with that. Thoughts anyone?
Posted by Rachel on 9/09/2012 No comments:

Remember, people will judge you by your actions, not your intentions. You may have a heart of gold, but so does a hard-boiled egg.
Posted by Rachel on 9/09/2012 No comments: