The Last Duel by Eric Jager 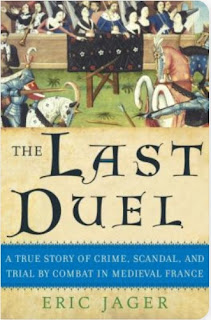 I was delighted when Michael sent an email my way asking if I'd be interested in a revisit to the joint post series for a book that has recently been adapted.

For those that are new to what was once a monthly series, this is when Michael reviews a film adapted from a book which gets a review here.

Click here for Michael's film review of The Last Duel
at It Rains... You Get Wet


The Last Duel, while technically a misnomer, is perfectly summarized by its subtitle. If you decide to pick this one up, you will indeed learn the true story of France's last trial by combat. The combatants were Jean de Carrouges, an unlikeable, litigious knight of good family, and Jacques Le Gris, a newly influential squire and former friend of the above. Le Gris was also a very close friend to the overlord of both men. The trial comes about because Marguerite de Carrouges accused Le Gris of rape [note: the assault and thus the testimony is graphic]. He is acquited of the crime by the above-mentioned overlord and thus Jean de Carrouges, Marguerite's husband, appeals to the king to seek justice via trial by combat. And so began what was a surprisingly (to me) bureaucratic chain of events. Trial by combat was an old and, by this time, unusual legal proceeding which had very strict rules governing it. Additionally, under fuedal law, Marguerite herself had no legal standing in this case without her husband's support and so rather than being the plaintiff, she was the chief witness. This was not a position without danger, if her husband lost the combat she would also be seen to have been false in her testimony and so would be put to death.
Eric Jager does an excellent job of placing the reader inside medieval France. The interwoven threads of contemporary political, cultural, social, and geographical elements are well described and make it easy to understand the relationships, political connections, and what is truly at stake. That being the case, it was not only jarring but quite sobering to read a statement that could come from any number of sources published this year.

So if in theory rape was a serious crime for which the law provided heavy penalties, in practice it often went unpunished, unprosecuted, and even unreported.

It's a credit to the writing that we can easily slip into these lives and understand their experiences and motivations. It's disquieting to feel those experiences can resonate so fully with us today.
In addition to firmly establishing the local political framework, Jager takes special care to describe civic infrastructure. Pardon the dry term but it does seem the best way to encapsulate how clearly he helps the reader to understand the types of roads that were being traveled, the layout of the cities, and the buildings wherein events took place. It was often in these thorough descriptions that I would find myself most firmly in "the past is a foreign country" territory. For instance, the trial took place at a monastery because Saint-Martin-des-Champ maintained a battlefield! It also contained a tribunal and a prison since it was the local criminal court. I will never think of a monastery in quite the same way again. And while we're here, let me not forget to mention that animals(!!) were also tried and condemned at Saint-Martin's.
I found too that Jager's committment to bringing medieval France to the modern reader hid entire books in throwaway sentences.

The altar was maintained by a tax on lawyers and alms paid by the accomplices in the murder of Evain Dol, a judge of the Parlement slain by his wife's lover in 1369.

Um, excuse me? You hit me with that and then just immediately carry on to the next paragraph?
One last little detail that really caught my attention was the fact that the trial had to be watched in total silence. The layout of the field of combat is detailed in the relevant chapter and, also, all the ways in which fairness was ensured. Most of this was in the design of the grounds and fencing but another rule was silence. Nothing was to distract either combatant. I truly cannot imagine watching two people fight first on horseback and then on foot, to the death, in total silence but for the sounds of the combat itself.
All in all I found this a rich, accessible text that wonderfully brought forth the humanity of those at the center of what were very violent and traumatic events. It can be hard to read violent testimony but I think Eric Jager takes care to present this accounting, as best he can, from the perspectives of those that left it.
Now about that movie... Don't forget to check out Michael's post.

Want a little behind the scenes on this book and the movie? Listen to an interview with the author here.
Want to hear a couple of historians chat about the movie? Click here (same podcast as above, different episode).
Want a little trial by combat in your fiction? Don't miss this must read! It's great in audio, as well.