I Am Legend by Richard Matheson 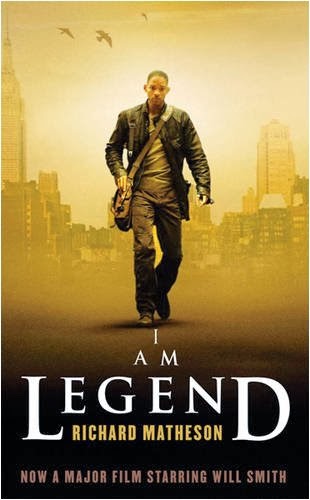 
Thank goodness for my ongoing partnership with Michael! For one, it's super fun and, for two, teaming up with Michael is always recommended. But, also, because without this ongoing series I would be completely out of the book blogging game these days. I suppose it's a quiet period for me and book blogging, but I don't want to give it up so many thanks to Michael for keeping me going during this quiet time. Now, this month's pick was mine and I had no idea this title is considered scifi/horror. My first horror pick! What a surprise. I usually leave horror to Michael. I'm really excited to see what he thought of I Am Legend.

Click here for Michael's film review of I Am Legend
at It Rains... You Get Wet

I just checked the back cover for spelling of the protagonist's name and now the blurb is all I can think of so I'm just going to quote the backcopy for a synopsis: "Robert Neville may well be the only survivor of an incurable plague that has mutated every other man, woman and child into bloodthirsty, nocturnal creatures* who are determined to destroy him. By day he scavenges for food and supplies, desperate to find any other survivors who might be out there. But all the while the infected lurk in the shadows, watching his every move, waiting for him to make a mistake..."

*not sure why the word vampires isn't used here because the creatures straight up are vampires and vamps are all the rage right now so why not capitalize??


I chose this title because of my continued interest in the film (despite that unfortunate ending) and I admit that my view of this story is heavily influenced by the film. So much so that I think my comparisons between the two depictions started at about page three and never let up. I'm sorry to say, the novella did not do so well in those comparisons. (It's been not quite three years since we queued up another Matheson title and I'm wondering if he's just not the author for me.)

Film Neville is so vastly superior to Novella Neville (ha! I like that, Novella Neville) that I was never able to take NovNev seriously as a survivor. Exhibit A is in the first few sentences when we learn that he can't be bothered to calculate sunset! The creatures that come out at night WILL KILL HIM and yet he can't be bothered to calculate sunset?? "On those cloudy days... sometimes they were in the streets before he could get back. That was why he chose to stay near the house on those days."  Hey, I won't blame ya for sticking close to your safe zone but, seriously? I'm supposed to believe you are possibly the only survivor of a heinous plague and you can't be bothered to do a simple calculation that might save your life? Uh, yeah, you lost me.

Ok, so, NovNev lost me but there's no reason Matheson couldn't keep this story moving in such a way that I could mostly ignore the ridiculous aspects of NovNev's character (necrophilia, much?) except he doesn't quite have the follow-through that I require of a writer. This title has a great set-up (and the end is friggin' awesome but I'm not gonna ruin that for anyone because, if you manage to slog your way through, you should at least be rewarded with the cool ending) but the writing undercuts it constantly. For instance, its internal chronology is not chronological. I thought I was messing it up due to skimming but when I checked over dates and the description of passing months/years it doesn't add up. This shit matters because you're building a world for me to believe in. You're telling me this character has changed dramatically between Time Zero, Time + Six Months, and Time + Two Years. If you get the chronology wrong it's more than just irritating, it undermines the development of the character in response to his experiences. Worse, it poofs some experiences right out of existence.

"Deep in his body, the knotting heat began again, and he pressed his lips together until they were white. He knew the feeling well and it enraged him that he couldn't combat it." The feeling and it are horniness for women he considers dead. (Um, yuck!) When you start working out the timeline (as best as one ever can in this title) he's squirming around with his bitter enraged horniness only six months after Plague Problems. I understand that some folks really need it bad but I'd think his self-professed revulsion at the Undead outside his door (and some, shall we say, Self Care) would at least keep the Horny Toads at bay for 6 months! His constant anger at "lewdly" posing (undead) women never rings very true and around the halfway mark this bit is thrown at the reader: "Sex was fast losing its meaning without the endless prodding of mass hypnosis." Mass hypnosis was responsible for his initial, uncontrollable attraction to undead women? He goes on to say he had mostly just tried to adjust to his belief "that he was actually the only one left in the world" and, again, I have to say that totally undermines why we spent the first quarter of the book hearing him whine on about his unwanted attraction to almost any adult female body he encountered.

Continuing in my quest to get into a cool story, I tried to focus on the vampires. There are a couple types (I guess) and those types are even explained but I was never able to really get the distinction. It's implied that some of the infected are genuine vampires and some are psychological vampires. I actually thought that was a clever way to justify the idiot vampires that hung around Neville's house every damn night but even this explanation was inconsistently applied.

The final straw comes when Neville encounters another survivor. BEGIN SPOILER (highlight if interested): This is years after the initial infection so anyone who is still out and about at this point knows what the fuck is up. I'll admit that Neville is not the sharpest tool in the box but he has some grip on what it takes to survive. If you encounter a survivor who "wore a wrinkled and dirty white dress" and the "skirt of her dress whipped against the grass, holding her back" that survivor is obviously not to be trusted because nobody who could live in this new world would be stupid enough to wear such useless, unsurviving clothes! END SPOILER. Come on, NovNev, even you can't be this dumb. Ugh!

When it comes down to it, this novella is a good idea with a cool ending but not much else. My suggestion is to stick with the movie because it smartly smartens Neville up, keeps and/or improves the best elements of the story, and is quite a good time. I know, I know, the ending... I'll have more to say regarding the film's ending over at the film review. Don't forget to check out Michael's post.

Note: While it's coming clear to me that perhaps Matheson and I don't mesh well, he's certainly beloved of many and I wanted to link this article published at the time of his death.


Coming up next:
The Name of the Rose by Umberto Eco