Salmon Fishing in the Yemen by Paul Torday 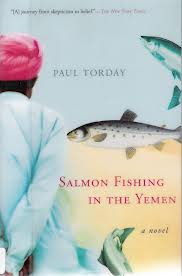 
I picked two titles for this month's joint post with Michael and I have to admit my failure and, possibly, apologize. Firstly, I picked a title and, for various reasons, had to do a takesy backsy. Michael, with his usual grace, had no problem with this and suggested a few alternatives. I picked this one because I was intrigued by the bizarre premise. Despite what appears to be universal praise for the title (my copy had 4! pages of blurbypraise) I was not a fan. So, apologies to Michael if he ended up reading and disliking this one as much as I did. And apologies to any readers who love this book; here's your warning that I didn't and my review will not be full of praise, blurby or otherwise.

Click here for Michael's film review of Salmon Fishing in the Yemen
at It Rains... You Get Wet

From the publisher's website: "Dr. Alfred Jones is a henpecked, slightly pompous middle-aged scientist at the National Centre for Fisheries Excellence in London when he is approached by a mysterious sheikh about an outlandish plan to introduce the sport of salmon fishing into the Yemen. Dr. Jones refuses, but the project, however scientifically absurd, catches the eye of British politicians, who pressure him to work on it. His diaries of the Yemen Salmon Project, from beginning to glorious, tragic end, form the narrative backbone of this novel; interspersed throughout are government memos, e-mails, letters, and interview transcripts that deftly capture the absurdity of bureaucratic dysfunction."


I started this title quite prepared to like it. The bizarre premise coupled with a narrative told through diary, memos, emails, etc is just the kind of thing to catch my interest. I was initially taken aback by the assholery of Dr. Jones and the ridiculously over-the-top FemiNazi nature of his wife but I recalled seeing "satire" generously sprinkled through the blurbypraise so I figured I just didn't have the right attitude. I switched to reading it as a satire but then enter Exotic Foreigner and I was like what the shit have I got myself into? The beauty of satire, to this reader, is its ability to subvert the status quo. I failed to catch the subversion of this book. I was getting more and more annoyed with it as I read and started mentally composing nasty replies to all the individual blurbs. Then I went on to marking out passages as back-up to my disappointment all with the intent of taking a big poo all over the novel. Then I thought, this is just mean. Not every book is going to catch every reader and one person's satire is another person's total miss. So, instead, I thought I'd do something useful. I'm going to list the two biggest misses for me on this title and maybe it'll help others decide if this is one that will work for them or not.

1. Dr. Jones and his wife do not love each other. I doubt they ever did. They don't communicate their needs/wants and never did. It's clear that Dr. Jones has always allowed this relationship to happen to him rather than being a participating member. Whatever this says about his wife, it's none too complimentary of him either. And again, rather than doing something concrete (like filing for divorce) he just constantly bombards his wife with "are we still married" emails when SHE HAS MOVED TO ANOTHER COUNTRY. Dude, wake up! The thing is, he never seems to learn that this is his failing. Instead, he falls in love with his new boss (the Exotic Foreigner's Estate Manager) because she is so Awesomely Wonderful (in point of fact, she is) but he doesn't know her in any kind of personal capacity. She's capable, caring, intelligent, and kind. But what does she do at home? What are her hobbies? What is important to her in life? Does she want children? Etc, Etc. It's easy to fall in love when you don't have to bother with any of the hard, real stuff of relationships. Dude, wake up!

2. It features an Exotic Foreigner. It features a fucking Exotic Foreigner!!! I about fell out of my chair. But then, ok, going back to the satire thing I thought there would be some lovely subverting of this outdated and insulting trope. Nope, not really. Our Exotic Foreigner never loses his temper, always senses how those around him are feeling, never says the wrong thing, inspires the previously uninspirable, opens Dr. Jones mind to faith/believing in impossible things. Oh my gosh!!!!! Is the satire supposed to be that we have moved beyond the Magical Negro and now have the Magical Arab?


Let me leave off with a positive comment, the book has several laugh out loud moments. It's mostly when it's mocking politicians (an easy thing to do really) but the path of Dr. Jones being bullied into taking on this project then blamed when it's out of favor (then being needed again when it's in favor) were the best parts of the book.


I realize this is a bit of a non-standard review but I hope it'll help folks decide if this is a book for them or perhaps one to pass over.

So about the movie... don't forget to check out Michael's post.