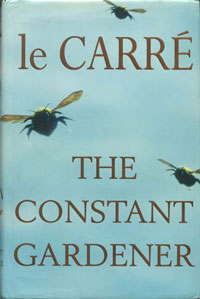 
I was doing a bit of personal admin before writing this up and I noticed that last month was the three year anniversary of Michael and me (I? oh my grammar challenges) doing these posts together. I don't think either of us mentioned (or noticed?) that. Michael noted that it was science fiction that started it all for us, which was the genre of last month's choice, but I'm going to take a moment here to raise a glass to three years of community that all started with an innocent request by me for Michael to do a specific movie review.

Click here for Michael's film review of The Constant Gardener
at It Rains... You Get Wet


In the last three years we've done a few fun twists to our posts (Free Fall anyone?) and I've realized belatedly that I should have asked for a twist again this month. I tried reading this book a few years back and never finished it. I liked the movie so much that I wanted it to be a part of our series so I thought I'd try again... I should have asked to do the review twist of me taking the movie. Ah, well. When faced with not quite knowing how to arrange a review I'm not that keen on, I steal AW's format and plunge ahead.


Tessa Quayle has been horribly murdered on the shores of Lake Turkana in Northern Kenya, the birthplace of mankind. Her putative African lover, a doctor with one of the aid agencies, has disappeared. Her husband, Justin, a career diplomat and amateur gardener at the British High Commission in Nairobi, sets out on a personal odyssey in pursuit of the killers and their motive.

His quest takes him to the Foreign Office in London, across Europe and Canada and back to Africa, to the very spot where Tessa died.


Cover:
This cover gets a big thumbs up from me. I love simple covers that have a clear connection with the book. Even better if you have to actually read the story to understand the cover.

"The news hit the British High Commission in Nairobi at nine-thirty on a Monday morning."

I normally remove this section but I kept it this time simply to remind myself of whose head you're in for the first sentence. The POV is third person throughout and the first 100+ pages are in Woodrow's head. This was a bold choice by the author, imo, because Woodrow is one dark hallway away from being a rapist. Spending one hundred pages in his skeevy head is why I didn't finish the book the first time. I believe I shoved it under a rock and then went to take a shower.


What Works:
The plot, the writing, and the characterization are all fantastic. It's incredible to me that I can like so much about this book but still not really like this book all that much. le Carre is a wonderfully gifted writer and it's a pleasure to experience his work. However, my appreciation was all in the craft. I was never that invested in the narrative. It even features a bit of the unreliable narrator slant and I still wasn't all that much into it. Bizarre how a thing like chemistry can matter when reading. Me and this book, we did not click.


What Doesn't:
Obviously those first 100+ pages with the disgusting perv are high on my list of what doesn't work. But even when past that, I was still not satisfied and it took almost the entire length of the book for me to put my finger on it: it's the perspective. All the mystery and the excitement has already happened. The reader is just playing catch up. Tessa is an amazing individual who committed herself to an extraordinary path for justice and we don't get any of it. Additionally, her research into the Three Bees drug trials being performed in Africa would have resulted in numerous encounters with folks "in the fray" trying to understand what was going on. Why is this story told after her death via Justin's journey? What did that storytelling lens add? These are not rhetorical questions: I'm genuinely curious as to an answer from someone who likes the book as it stands. My thoughts are that we missed so much of the really interesting stuff that would have been going on while Tessa was doing her work. To me, the only thing its structure adds that might not have otherwise been part of the story is the question of Tessa's fidelity. And is that little tid bit worth it? Hardly. I say all this while quite liking Justin's character. His arc is definitely interesting but so overshadowed by what I would rather have been reading that I never was able to invest in him fully.


Overall:
The plot is truly the centerpiece of this work. My ambiguities aside, a look at big pharma as it exploits whoever it wants to make a profit is fascinating, frightening and necessary. This is a work of fiction but if you hesitate to believe that it touches precisely on truth then you might want to learn more about how drug companies work.

le Carre included this fantastic quote at the beginning of the novel:


Ah, but a man's reach should exceed his grasp,
Or what's a heaven for?
Andrea del Sarto by Robert Browning


So about the movie... I love it but let's leave that discussion for Michael's post.