I don't think it's just because I'm a scientist that I can't understand people who aren't interested in being well informed. Many topics do indeed encompass ambiguous evidence but at the end of the day there is a most likely scenario that is supported by facts. Why oh why are there so many people not interested in facts? Why are we so willing to listen to people without expertise just because they are saying something we want to hear? Heads in the sand have never accomplished anything!

On a more fun note, check out my impromptu lab museum (that chair/bench in the background is where sgwordy makes science happen:): 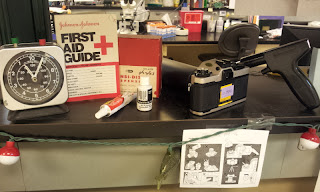 Items left to right -
1. Timer made by Great Britain's Smiths. You set it with the dial in the middle and hit the green button on top to start it. Year unknown.
2. First Aid guide from the kit in the lab. Includes such handy tips as to how to handle glass in the eye or disembowelment. 1979.
3. Sensi-discs to detect bacterial susceptibility to antibiotics. 1963.
4. Tube of glue that now has bubbled surface due to heat exposure? Year unknown.
5. White-out. Included because we are not allowed to use white-out (against accreditation body rules) so it can only exist in our museum. Year unknown.
6. Olympus camera. 1986. (See papers hanging below for directions on use. For example: large X through a picture of biceps to indicate that you should not press too hard on the buttons.)
7. Fire lighter. Year unknown. (These days they look more like this.)
Posted by Rachel on 7/21/2012