The Black Dahlia by James Ellroy 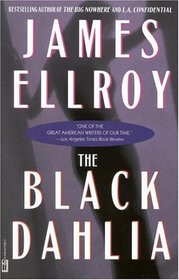 This title doesn't exactly bring out my sentimental side but, in looking for something I posted a couple years ago, I noticed that Michael and I just passed our 2 year anniversary of doing these posts and sharing our love of books. It started out with exchanging our favorite titles with each other and doing these joint posts, then culminated with our families meeting up over the weekend of the 2011 L.A. Times Festival of Books. 2012 saw me in SoCal again for the festival and for good times with Michael's family and our reader friends. Just one more reason to love the internet: our communities are so much larger than our localities. :) Thank you all for indulging my moment of sentimentality and now back to the books. For anyone new to the this series, this is where we choose a book/movie pairing and I say a few words on the book and Michael says a few words on the movie.


Click here for Michael's film review of The Black Dahlia
at It Rains... You Get Wet


I'm not always ahead of the game but I'm cutting this post very close to the wire, the wire that is our agreed post date, that is. Why do I mention this? It's because I almost gave up on this book before pg. 50. That sure wouldn't have been very nice since this title was my suggestion. So after weeks of taking any excuse to put the book down, I had it at work and didn't have anything else to do at lunch so I gritted my teeth and pushed through. I have so little interest in boxing that the focus on it at the beginning was a bit boring for me but I certainly could have made it past that. However, there is a limit to the number of racial slurs, homophobic comments, denigrating descriptions of women, and random police beatings that I can take. If you're wondering why so many people hate LAPD this would be a nice lesson in the historical behavior that elicits such hatred. Fictionalized it may but I expect there's a goodly dose of reality here. Anyway, the beginning is really hard to get through. I won't read another Ellroy and if you were to pass on this book because you weren't interested in the assault on the eyes it offers, I certainly couldn't blame you. On the other hand, it is a rabbit hole of the seedy side of cops and criminals that can certainly suck you in once you get past the beginning (slurs, etc fall off precipitously but do not disappear, of course, it's about the kind of people who do and say awful things so that's not very surprising). So yadda yadda yadda what is it actually about?

From the author's site: On January 15, 1947 the tortured body of a beautiful young woman was found in a vacant lot in Hollywood. Elizabeth Short, the Black Dahlia, a young Hollywood hopeful, had been brutally murdered. Her murder sparked one of the greatest manhunts in California history. In this fictionalized treatment of a real case, Bucky Bleichert and Lee Blanchard, both LA cops obsessed with the Black Dahlia, journey through the seamy side of Hollywood to the core of the dead girl s twisted life.


This short description doesn't begin to convey the twists of plot and character that reveal themselves as the mystery of the Black Dahlia disrupts the lives of Bucky, Lee, and their best friend Kay. Notwithstanding what I've already mentioned, this is a hard read. This book is full of trashy low-lifes and the cops aren't that much better. One thing that took me by surprise was the length of time the book covers. It's over two years from its opening to its end and the main protagonist spirals further and further out of control.

...and I don't dispute your somewhat belated desire to see justice done.


This line stuck with me more than any other because all the justice (ha!) did feel belated. No one wanted to act. Either the political atmosphere wasn't right, the correct person couldn't be counted on or bribed, evidence was suppressed for minor reasons, the list goes on. We see events through the eyes of Bucky and his brand of justice was convoluted and inconsistent. This was a particular weakness of the book. It's not that I wouldn't expect these characters to be complicated and flawed but I would expect to recognize why they did what they did. Much became clear as the story wound up but much remained inexplicable. The connection between events and Bucky's self-defeating personal decisions weren't always clear. Bucky's connection with Kay and the deceased Dahlia weren't developed in ways that made it obvious why he pursued the courses he did. His professional and personal obsessions with these things were so important to the book that I thought it was quite a flaw for half of this to never feel natural.

I wasn't too enamored with the ending (I'd definitely be interested in how other readers felt about it) but the plot had just the right mix of crazy and plausible to keep me interested even if I didn't care for the end. Some of what I liked the best is spoilerish so highlight if interested: I loved, loved, loved how Bucky was being played on all sides. No one was straight with him and, as the reader, I received it as the crushing blow he received it as. I think that is when I was most involved with the story. I still don't know that I completely buy that Bucky would have been able to come back from this (his with-a-bow-on ending with Kay didn't quite ring true for me) but I can completely understand how it drove him to see the Dahlia as his only point of control.

I wish my thoughts were a bit more cogent but a plot thicker than Steen's and a book I almost put down make for a hard task. I don't know that I'd recommend it but I will at least say that it develops into something better than I would have anticipated at the start.

Don't forget to swing by the film review. I thought I'd already seen this movie but when I queued it up for a repeat I realized I hadn't or that I hadn't finished it the first time around. I did finish it this time but it did not leave a good impression. I think it was just a poor adaptation in general but it really suffered from my inability to stop comparing it to the adaptation of L.A. Confidential. Before you head over there, the quote Ellroy chose to include at the beginning of the book:

Now I fold you down, my drunkard, my navigator,
My first lost keeper, to love or look at later.
--Anne Sexton

Coming up next:
Shoeless Joe  by W.P. Kinsella
(Field of Dreams)