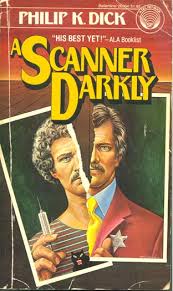 
le0pard13 and I are back again for a look at a book and its adaptation into movie form. I think A Scanner Darkly was a suggestion (yes, we take suggestions! anything you'd like to see get the joint treatment?) from a commenter at Lazy Thoughts From a Boomer. I sure am glad for the suggestion because I really liked the book and I enjoyed the movie, as well. So let's get to it.

Robert Arctor is an undercover police officer in Los Angeles. When undercover, he's a small time drug dealer called Robert Arctor. At the office he's disguised in a scrambler suit, as are all his colleagues, and called Fred. As Arctor, he's trying to make his way up the dealer ladder to find the source of Substance D, a powerful narcotic that eventually leads to a split in the user's brain. As Fred, he has been assigned to tail Arctor. The story centers around his increased dependence on Substance D undermining his ability to maintain the two identities.

The story addresses a pretty serious topic. But before we get too focused on the serious let's have a laugh about Arctor's weird hard-on for pistol whipping (there was a time at the beginning where I thought this was going to be a per chapter threat!) and PKD's odd dialogue style totally working for a book about a bunch of people on drugs. Seriously! It's like his dialogue style found its calling. Awesome! And if you didn't click on the book link above be sure to eventually have a visit because the second cover photo is to bust-a-gut for [now included above]. Oh the hair! The stache!

Quick note about the druggies: I'm not a huge fan of books/movies about people doing drugs. I have a lot of interest in the infrastructure of the drug trade (and its relationship to law enforcement) but stories that focus mainly on those doing drugs - and their drug-induced behavior - are of little interest to me. There was a portion of the movie that totally lost me as a viewer since I was just sitting there watching druggies be druggies, but it wasn't too long and the book was much more interesting during those parts. Actually, the movie is a remarkably faithful adaptation but the internal processes of the characters - esp Arctor - are, obviously, lost in the film. It's the windows into the users' minds that made the book more enjoyable for me in those parts. Otherwise they both do a great job of introducing the very interesting concepts of dual identities and the value of the individual vs. the group within the backdrop of a relevant societal issue.

I've always loved PKD stories because of his cool ideas but he really steps it up for this one because it's a fantastic idea laced with dead-on observations about people (as all the best sci-fi is:). Arctor often struggles with his genuine compassion for those he is tailing and his feelings are humorously illuminated as he recounts hearing this phrase from a non-using friend of his drug crowd:

If I had known it was harmless I would have killed it myself.


Besides the fact that the phrase itself makes one pause to think of how often this theme plays out in human history, Arctor's response - and what it means to the dual life he is leading - is one helluva passage. Even as he struggles with this there's no doubt in his mind that he will bust those that he is ordered to bust. Then, he begins to suspect one of his friends of a revenge narc and thinks he's being observed, ironically he's disgusted by the thought of someone acting like they are your friend just to get dirt on you (double irony, of course, is that he is being observed but only by him).

As mentioned above, the illustration of Arctor's conflict, and actually many of the conflicts and problems in the story, is humorous but it's of the bittersweet and ironic variety. Like if you didn't laugh at it you just might cry a little. I find it's one of the more successful aspects of the book. You're going along, enjoying yourself, getting totally into the story and suddenly laughing out loud. Then you peel back the humorous surface and wonder how it is you managed to laugh at the situation. Very powerful and engaging stuff.

On the face of it, this is a simple story of a rather odd undercover set-up. But the surface really is only the beginning. There is so much going on in this book! There's a hint of this before you even start reading. For exploration of this hint, you'll need to pull out what I think is the most successful publishing endeavor ever, and certainly one of the most influential books in the world, the Bible. Flip on over to 1 Corinthians 13 and read through one of the Bible's more popular chapters (and lest we overlook; oft-abused in wedding ceremonies) to get started. There's a slight catch; you need the King James Version. Follow along with me and you'll see why:

NIV - 1 Cor 13:12 Now we see but a poor reflection as in a mirror; then we shall see face to face. Now I know in part; then I shall know fully, even as I am fully known.

Now, I've always found 1 Cor 13 rather poetic and layered but holy hellfire that verse 12 is just packed and so super awesome as relates to A Scanner Darkly. Ok, enough alluding, let's get on with it.

On the surface you've got the plight of addicts, the difficulty of the dual life of an undercover cop, and the often hilarious attempts of Arctor to woo Donna. A constantly recurring theme just under this is the rights of an individual vs. the health of society at large. Go a little bit deeper and the title, which at first speaks simply to leading a dual life, fairly hums across every chapter, line, and theme. Now I know in part; but then shall I know even as also I am known. That says it all and if I were to really get into this, massive spoilers would rear their ugly heads. I'd rather leave the finer details for the reader to discover than ruin them. I don't want to say too much about the movie here but, even though it's a fantastic adaptation (including word for word conversations), you really miss a lot of what is best about this story if you don't read the book.

It's obvious (and not just because of the author's note) that PKD isn't trying to point any fingers or make any judgments. He took a lifestyle that had an immense effect on his own life, threaded it with a great idea, then proceeded to highlight the multiple realities of drug production, use, and prevention with a keen eye for humanism. It really is one damn fine tale.

I've focused mostly on what I liked but there were a couple passages that centered around a topic that always gets my hackles up. This was the notion of a lost golden age. Like things are so shit right now but "a long, long time ago" there wasn't so much gray and justice and wisdom always aligned and blah de freaking blah! I can't stand this theme! I'm still waiting for the golden age. Would anyone seriously trade being born now for being born sometime in the past? Give me a break! Taking just being female as an example there are many Ages (and decades none too distant) that did not look kindly upon the lack of a penis. Plus, if you're constantly looking backward for a fabled golden age you certainly can't be looking forward to a time when we might truly attain an age of equality and sustainability.

But, really, that's a small part of the overall story and other quibbles I have are pretty small. This is a great book that is so worth your time. Pick it up for the awesome story but read it attentively for the rewards of closer inspection.

Fred [Arctor in scramble suit]: If you boys are psychologist types and you've been listening to my endless debriefings with Hank, what the hell is Donna's handle? How do I get next to her? I mean, how is it done? With that kind of sweet, unique, stubborn little chick?
"Each girl is different," the seated deputy said.
"I mean approach her ethically," Fred said. "Not cram her with reds and booze and then stick it into her while she's lying on the living-room floor."
"Buy her flowers," the standing deputy said.
"What?" Fred said, his suit-filtered eyes opening wide.

Now my [auto] insurance rates will go up... In this world you pay for tilting with evil in cold, hard cash.

It requires the greatest kind of wisdom to know when to apply injustice. How can justice fall victim, ever, to what is right? How can this happen?


Don't forget to check out the movie review! And, as always, many thanks to Michael for the fun of joint analysis.

Links to previous joint posts:
The Minority Report
The Children of Men
Posted by Rachel on 8/20/2010