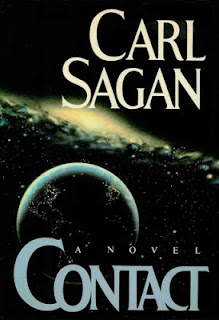 
It's a fun surprise to me that I'm taking an Intro to Astronomy course during the same month that Michael and I have chosen Contact for our joint post series. It's not my first time trying out a course like this but maybe this time it will take and I'll actually become the kind of person who goes out star gazing. Even if it doesn't, I'm at least getting to know the highlights of the Southern sky, and it's put me in a real Contact kind of place. While staring at the "pointers" and the Southern Cross and "deep sky fuzzies," I'm imagining life on other worlds. So one can also say that Contact has put me in an alien kind of place. Aptly, this is also not my first time reading this book.
For those that are new to our monthly series, this is when Michael reviews a film adapted from a book which gets a review here.

Dr. Ellie Arroway is a radio astronomer who believes in intelligent life beyond Earth. As Director of the Argus Project, she listens for extraterrestrial life. Vega features as the unlikely source of a Message from outer space and, when The Message is finally deciphered, it turns out the Vegans have sent detailed instructions for the building of a Machine.

The delightful and arresting aspect of this book is its enormously imaginative scenario grounded in accessible human experience. In that sense, it is what all great science fiction is: human nature grappling with the extraordinary. While large in scope the story is familiar in its characters. These are not caricatures or idealistic representations but real people caught in what would be one of the greatest moments of humankind. It makes it easy to be swept along in the story.

The events take place over ten years time and culminate with the Millennium which is, obviously, no longer a futuristic setting to those reading now but was when published. Interestingly, this is not what most obviously dates the book. It's the presence of the Soviet Union and, by extension, US-Soviet relations that really date this sci-fi gem. I wasn't bothered by it; in fact, I enjoyed seeing a vision of what world relations would be like with two superpowers still acting like paranoid morons. But that's really neither or nor there...

In my opinion, Sagan was a genius at making technical details accessible to lay folk. I thought there was a perfect blending of the technical with the fantastical and really enjoyed that aspect of the book. It certainly brought a realism to the book that might have been lost without Sagan at the helm. Plus, it was highly entertaining to have all this really advanced science alongside some pretty clunky "futuristic" technology.

Not working in the book's favor was its stiff dialogue and hoaky science vs. religion subplot. The dialogue felt more representative than realistic. Hmm, ok, all dialogue is representative as it would be torture to read dialogue that reflected the way we actually speak in conversation, but this dialogue went beyond that. And the science vs. religion subplot never worked for me. I found it tiresome rather than intriguing (excepting the "Numinous" chapter) and was surprised that Palmer Joss was actually around for the whole book. That's how little I enjoyed the subplot: I was prepared to write off a character who ends up being much more than minor.

On the other hand, our main character is easy to stick with for the entirety of the story. Her practical yet romantical personality are perfectly reflected in the narrative structure which deftly guides the reader down a particular path. I did find the "daddy issues" aspect of her character to be a complete cliche and the ending for that felt shoe-horned (not to mention the overt daddy/god aspect of it - blech) but it's minor compared to the greater arc of her career and her place within The Machine Committee.

My favorite chapter in the book was the "Numinous" chapter as I felt like it was a microcosm (see what I did there?) of the entire novel. In this chapter, Arroway is trying to better understand those that prefer to couch science within religious terms or reject it completely. She's very clear on what she thinks of as the difference between spirituality and bureaucratic religions. In trying to learn more about the sometimes-rejection of science within these constructs, she's been doing some reading. The chapter features a beautiful representation of belief and shows the reader once again just how Ellie's mind works (in a word: awesomely:).


In the presence of the misterium tremendum, people feel utterly insignificant but, if I read this right, no personally alienated. He thought of the numinous as a thing 'wholly other,' and the human response to it as 'absolute astonishment.' Now, if that's what religious people talk about when they use words like sacred or holy, I'm with them. I felt something like that just in listening for a signal, never mind in actually receiving it. I think all of science elicits that sense of awe.


Did this title keep my attention throughout the entire reading? No. I can't be the only one who isn't interested in what amounted to a TV channel surfing scene... Did this decrease my enjoyment of the book? Absolutely not! It might not be perfect from beginning to end but it's a classic that is going to be satisfying to almost all readers and definitely one not to miss.

Coming up next:
The Constant Gardener by John le Carre