The Bourne Identity by Robert Ludlum 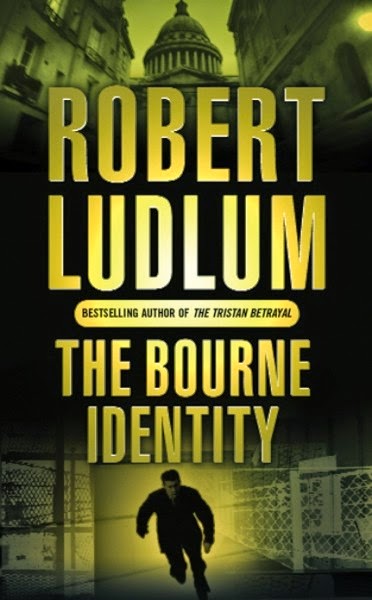 
It's hard to believe that Michael and I are already past the halfway mark for our annual joint reviews. In fact, we're past 2014's halfway mark, as well. Is this year flying by for anyone else? I'm just happy we're past the winter solstice down here as the days are getting longer again (even if I can hardly tell:). It's also a fun time of year as the Matariki constellation is up in the nightsky which signals the Maori New Year. It's celebrated with a weeks long festival and many different events and activities. But, anyway, on to this post, shall we?

Click here for Michael's film review of The Bourne Identity
at It Rains... You Get Wet

This title was my pick and I chose it for the movie. I don't even care for the book all that much (this is my second read-thru). I realize that's pretty goofy since I get the book assignment but I wanted to chat about the movie with Michael so obviously this was the only way. Ok, probably not, but I like any excuse to watch the film again and am really excited for its review. But for now I'll commence with AW's trusty format that always saves my bacon in situations like these.

Cover:
At what point does an author get to pass by the excitement of consistently publishing and move on to the thrill of being so successful that the author font is bigger than the title font? I've always wondered that. In any case, this cover is pretty forgettable design-wise.

Premise:
A man is fished out of the Mediterranean with serious gunshot wounds and no memory. Lucky for him, an exiled British doctor takes an interest in the man's health and works hard to keep him alive. The doctor's interest derives from the fact that he's deduced the man is a government agent (most likely American due to his dental work:) from his language proficiency and the surgically implanted negative in the man's hip. The negative (which gets read using a slide projector - hee!) has a Swiss bank account number on it. The man could be the doctor's ticket out of exile. So, recovered, off the man goes to Zurich to try to discover his identity and access his bank account. Almost immediately after obtaining the account funds, people start trying to kill the man who has amnesia. He has learned his name is Jason Bourne. That doesn't do anything for his memory but at least he still remembers how to be a spy and stay alive.

What Works:
The plot. The premise above does not do justice to the twists and turns of this story. I'd include more details but if you're familiar with the work you don't need them and if you haven't read it I don't want to ruin anything. It's a long enough book without me spoiling the reasons to keep going. Suffice it to say he is a spy but when almost everyone you encounter is out to kill you (including those representing your own government) you have to start to wonder just what kind of spy you are.

The psychoanalysis. This aspect of characterization/characters isn't as popular as it once was because, I think, laypersons understand so much more about psychology these days. However, the late 70s and early 80s are peppered with these asides and it works well here. Almost everything about this novel is over-written but don't hold that against this aspect of the book. It serves the character and plot well and doesn't feel like a convenient device.

What Doesn't:
The writing. I'm sure the not-so-subtle hints from above let this one out of the bag already but it's not well-written. And if you thought those italics were annoying consider it my way of preparing you for this title. I don't think I've ever seen so many italics in one book. Also, dozens of paragraphs started with Now! I kept wondering if Ludlum didn't have any faith in me as a reader. On top of the italics everyone shouted or roared or screamed all the time (even when being quiet was really, really important) and usually with !!!!!!!

The length. The copy I read had 566 pages and I think 350 would have been a whole lot better. It makes for a really repetitive read. I wanted to get lost in the action and the suspense but it was hard to do amidst the constant plot recaps. You definitely will not get confused by the plot. It will be explained many times. You will not ever wonder why characters do what they do. You will be told multiple times. You'll never forget what Bourne does or does not remember; he will tell you over and over.

Overall:
This is a book with a great premise and an awesome plot. Sadly, it gets in its own way making it more of a slog to read than a page turner. I'm tempted to look into Ludlum's earliest books going on the assumption that he was probably more heavily edited in his early days. If his plots were always this good, I could definitely go for something shorter and more tightly constructed.


NB: This book is dated in its technology and in its demographics. While the demographics thing did bother me I don't mind books with older technology. I was entertained by the microfiche and switchboards  and telegrams (and not just because I remember using them, well maybe not the telegrams:). Oh yes, it was also written at a time when the US dollar had considerably more value.

Coming up next:
Hombre by Elmore Leonard

My household are big fans of Alan Rickman. As such, we've decided to (continue) review(ing) his films from start to finish. Using IMDb, that puts us starting with...

January Man
Quigley Down Under
Truly, Madly, Deeply
Closet Land (yeah, we know it's out of order:)
Robin Hood: Prince of Thieves

The trailer makes it seem a lot less terrible than it is!


sgwordy: Haha, it's tempting to leave it at that but our adoring fan expects more. Actually, I did have a question. The set-up is pretty interesting so most of the terrible is in the execution. Would it have helped the movie at all if the cast had been two men or two women rather than one man and one woman?

Dr Musacha: Fine, this is for you, Fan. :) Maybe, but Interrogator was so unhinged that it didn't feel like an official proceeding. I really like dystopian police state stories (like 1984 and V for Vendetta) but in this case the threat never hit home with me because the whole situation was so surreal. Instead of making me feel like Victim had become another casualty to the philosophy of safety over civil liberties I just kept wondering if Interrogator was some random, well-dressed sexual predator who had kidnapped his latest victim to torture.
sgwordy: I felt the first half of the movie did a much better job of playing into the police state idea (you don't really know since the movie never leaves the one room) but the second half became mostly about the torture and Victim's psychological resistance to it. The police state threat disappeared and it just became a torture film. Speaking of that, even if it had been a good movie I still don't think I would have liked it as I really, really don't like watching torture. Even implied torture is really unsettled for me as a viewer.

Dr Musacha: With only two actors and one set, Rickman and Stowe have a lot of room to explore their skills. Did you think Alan Rickman took advantage of that?

sgwordy: I think his performance was uneven to tell the truth. At times I thought he was dead on for the zealous police interrogator but at other times it felt more like scenery chewing. That might have a little to do with the surreal aspect you mentioned. What did you think?


Dr Musacha: I think Alan Rickman is a master of threatening violence but when he moved into the actual violence I think he wasn't the right actor for the role. He's more of a controlled menace type of actor.
sgwordy: I would agree with that. Any other thoughts? I'm ready to move on from this one so nothing from me.

Dr Musacha: Despite my thoughts on Rickman as this particular villain my dislike of the movie didn't have anything to do with him or Stowe. It was the writing and the tone. There aren't any actors you could put in this film that would make me like it more.

sgwordy: On to the ratings then.

Was Rickman the best thing about this movie?
Dr Musacha –No but he did have a couple good one liners.
sgwordy – Naw, but what was really?

In the context of his body of work, on a scale of 1 to 10, how would you rate Rickman as Rickman?
Dr Musacha –3
sgwordy –3

Life is what happens...

Would love to do a reading roundup but have had very little time for digital life updates. Instead I'm going to share a music video. I'm always whining about how crap music videos are these days and I recently came by one that actually had a story AND seemed to have something to do with the song!